Follow Explore This Land on WordPress.com
Join 184 other subscribers

As we hike around the canyons and trails, I wonder what it would have been like to be a pioneer in southeast Arizona. But I think I would relate more to a pioneer, due to their tools and modes of transportation, than I would be to the earlier inhabitants of the area. The Salado were the people who dwelled in this area before the Apache Indians came to the area. It is estimated that they moved on/ disappeared a century or more before Columbus discovered the New World. Yet these people left behind dwellings and beautiful pottery. Other than their dwellings, pottery, tools and some trade goods, not much is known about what happened to them. Climate and resources to survive were probably a major factor in their disappearance, whether from natural causes or conflict.

Our first stop to learn about the Salado was a place named Besh Ba Gowah, in Globe, AZ. It is the remains of a village that also appears to have been a major trading hub for the area. People came from the Pacific coast and even the Gulf coast to trade their goods for the pottery that the Salado produced. It appears that the Salado experimented with various shapes for bowls and urns.

Less than an hour drive north of Besh Ba Gowah, near Roosevelt Lake is the Tonto National Monument. Here the Salado built their dwellings inside caves high in the cliffs. Although the dwellings are similar in design, they are polar opposites in location. The cliff dwellings are accessible by only one path leading to an entrance, that probably had a ladder that could be pulled up when the dwellings needed to be defended. Besh Ba Gowah sits in an open area where walls would need to be defended on all four sides. Both had similar dwelling construction of the rooms. Many had entrances from a hole in the roof. Few had windows and doors. Every doorway that I saw was very low to the ground, making one need to crouch or crawl to get through.

Off in the distance is the Upper Cliff Dwelling 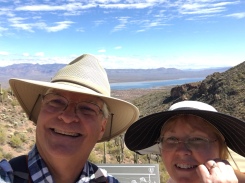 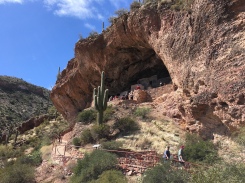 The trail to the Lower Cliff Dwelling is shorter but still steep. 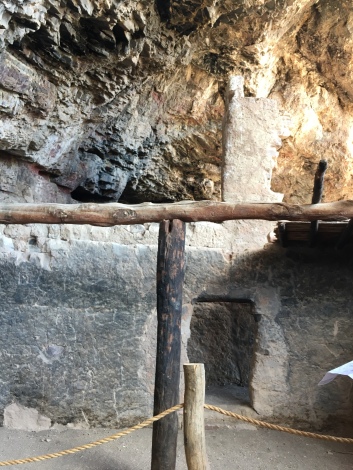 This doorway is only about 3 feet high 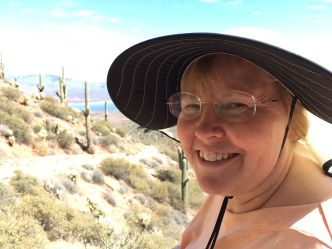 Roosevelt Lake in the distance

At the Tonto National Monument there are two sites, the upper and lower cliff dwellings. To go to the upper dwellings, you need to go on a guided hike. It is approximately a 3 mile round trip, and steeper hike than the lower cliff dwelling trail. The lower trail is about a 1 mile round trip hike and a paved trail with benches every so often catch your breath. Leashed dogs are allowed on the lower trail, but cannot go into the dwellings. Both trails are fairly steep. Take water along and go on a cool day.

Both sites charge a fee, but the Tonto National Monument accepts the various National Park access passes like the America the Beautiful pass. Although you could do both in one day, I would recommend two or three days. Also, spend a little time in Globe while you are there to have lunch. We enjoyed lunch at the Copper Hen Bakery & Cafe. The food was decently priced and good.

One thought on “The Salado – where did they go?”