The Portal Trail isn’t a long one. It is 1.5 miles to the overlook. This trail is used by many of the mountain bikers that want to come off the Poison Spider bike trail. Those who ride down the Portal Trail are crazy. 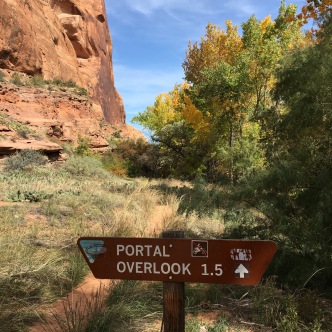 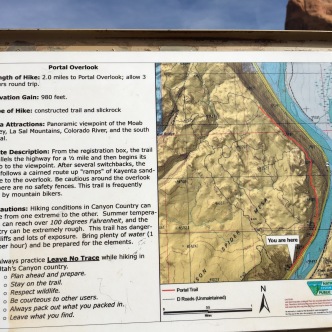 The Portal Trail is all uphill. I decided that this would be good practice for me before I head to my next position at Picket Post Mountain Trail Head. The trail starts out at the Jaycee Park. A half mile hike on a trail that winds through trees and cacti will bring you to the start of the Portal Trail. From that point, you head uphill. I would suggest a hiking pole or two. I had two, but found that I held both in one hand and Aria’s leash in the other. Having a dog along is a benefit when heading up the 980 feet gain in elevation over the 1.5 miles. As you get closer to the top, you have a few switchbacks to navigate and hope that a mountain biker is not coming down. There is not much room to step aside as Aria and I found out when we encountered our first of many bikers. Luckily, the rocks were large and loose so the biker was going super slow. 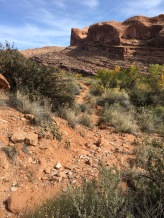 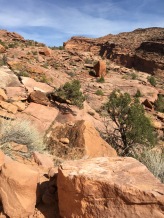 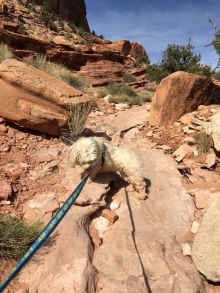 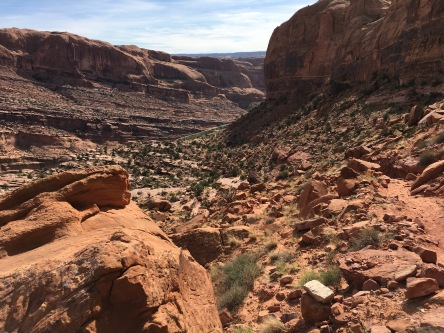 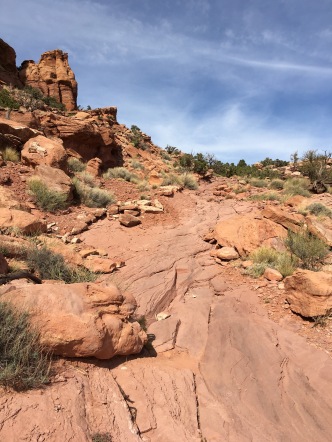 I wasn’t sure where the trail would end up leading us. Aria didn’t seem to care as she kept a steady pace upward. Having four feet on this trail is a definite advantage. A few times I did need to use both hiking poles to navigate the trail. As I looked up I could see we were heading towards one rock cliff. I was thinking that was our destination. I was wrong. Relieved that I wasn’t going to need to climb to that height we arrived at the overlook. There is a 3 foot stake driven into the rock which I used to attach Aria’s leash to. This let me walk around and take pictures without worrying about Aria falling over the cliff side. There are no railings, so the meek at heart may want to avoid this trail. The view was spectacular. I could see the Lasal Mountains, Moab, the Colorado River and even into Arches National Park. 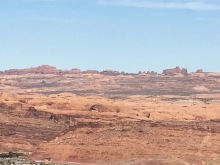 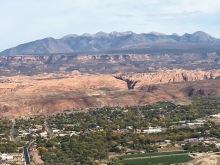 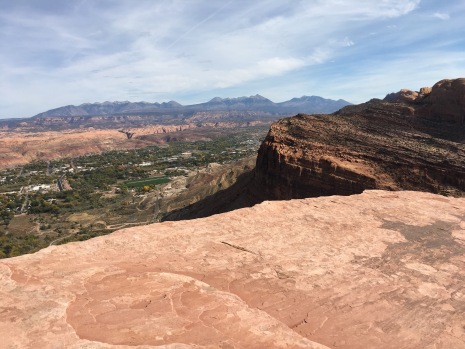 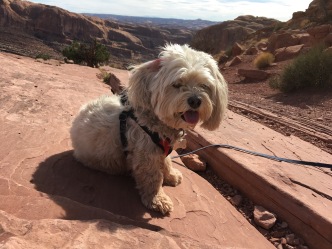 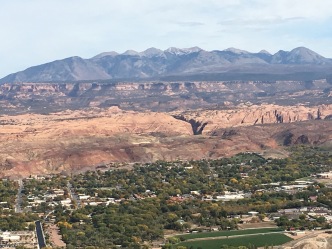 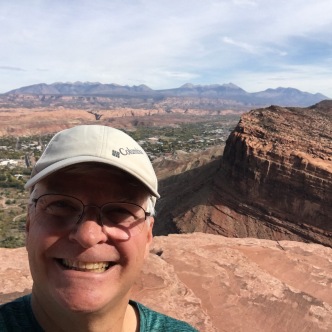 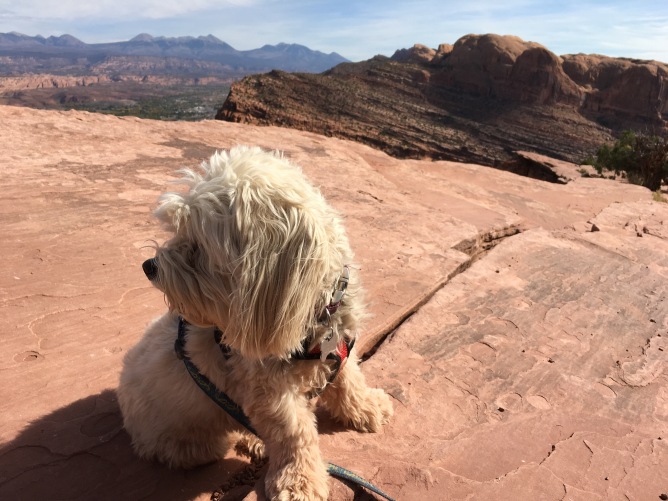 As Aria and I rested I watched more bikers descend the trail ahead. The narrow trail hugged the cliff side and appear to plunge far below. Most of the bikers I watched, walked their bikes at this point. I did watch one who thought he would ride down the trail. About 3/4 of the way down, he flipped head over heals, rear wheel over the front wheel and crashed. I was surprised that he did not go over the side of the cliff. He walked up to where I was with his bike. I asked if he was okay and he said he was. However, it was obvious that his shoulder was causing pain. He got back on his bike to ride on, but I think something was broken because I heard him curse then saw him walking his bike as he descended the trail out of sight. The picture below is the remaining part of trail that continued upwards around the rounded part at the right edge of the picture. If you zoom in, you will see the biker picking up his bike (lower center of picture). 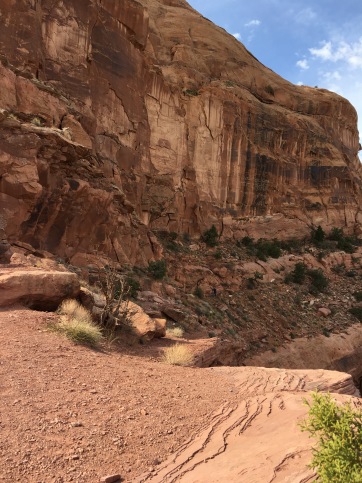 I decided that it was getting late and the remaining portion of the trail had too many bikers coming down, for me to continue. I asked one biker what was left, and he said it the trail went up a bit more and then met up with the Poison Spider Trail. He told me there wasn’t much to see. So, I decided to head back down after the bikers headed down the trail.

Going down was harder on my knees than I expected. Aria wanted to rush down, hopping from rock to rock. I couldn’t keep her pace and had to slow her down many times. The trail is steep and has many loose rocks and boulders to navigate. The hiking poles came into use for most of the journey down the trail.

The trip uphill took about 2 hours to complete. Going downhill took a bit over an hour. I would rate this trail as moderately difficult. Take hiking poles, plenty of water and maybe some snacks. A dog will help too!

Aria was tired by the time we got to the car. If you bring a fluffy, white dog, expect to give her a bath after the hike! 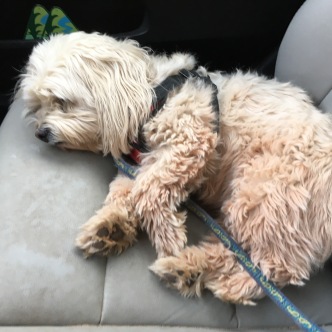 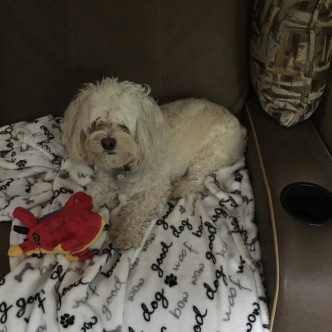