In my post Arches National Park I said that I would need to return and see the areas that I missed due to road construction. I decided to make my return before I left the area for my next volunteer position. I drove back into the park, a bit later than I had planned but before noon. Tuesdays are one of my “days off”, so I did my morning rounds at the campgrounds and made sure that Aria was set in the RV with food and water.

The park wasn’t very busy at noon, but I still had a short wait in line before getting to the entrance gate. I didn’t prepare for a long trip nor a hike this time. All I brought was some water to quench my thirst. So hiking Devil’s Garden (7 miles) wasn’t on the agenda for this trip. My goal was to see the Windows Arches.

There were more arches in this area than I had thought. All were a short walk from the parking area. The sun was out, it had warmed up to 72 degrees and I really didn’t need the water I brought. But I carried it around anyway.

First stop was to see Double Arch. This was the best arch I saw. Even though there were few people in the park, most seemed to be climbing all over the arches that I wanted to take pictures of. I could have sworn that the signs all said “Don’t climb on the arches.” 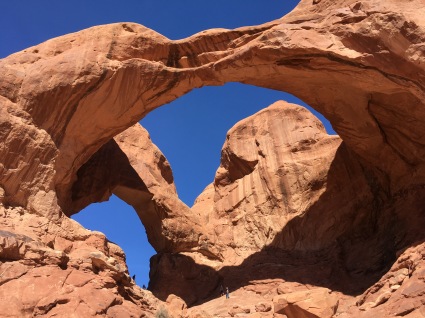 From the back side

Looking at the front side drom Turret Arch

Onward to the last arch, named Turret Arch. I guess it gets the name from the surrounding rock structures that remind me of the turrets that form the corners of castles. 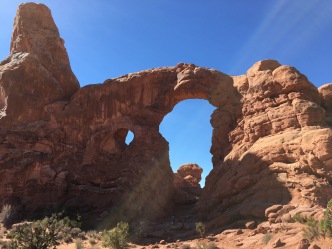 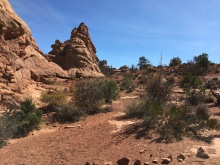 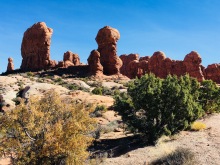 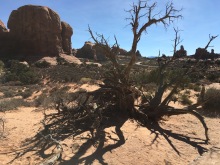 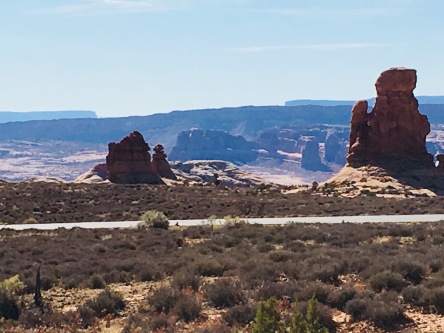 The Devils Garden hike will need to wait until I return to the Moab area.