It was time to go on another hike with Aria. BLM trails are great for dogs. The sun was out and the temp in the mid 70’s when I set out. After asking about the trails at the BLM office, I decided the Corona Arch trail would be a good choice. I wasn’t wrong.

Weekends are very busy for almost every trail, so I decided to go on a weekday. A short drive from my campsite along the Colorado River brought Aria and I to the trailhead parking. Only a few cars sat in the lot.

Before getting to the start of the trail, you need to climb a path of stairs made of wood and rocks. Aria, eager for the hike pulled me along. I will admit, I did need to stop about half way up. I signed us in at the trail’s start and we made our way to a set of railroad tracks to cross. BLM made a minor maze in order to cross the tracks. Aria wanted to go under the fencing instead of following the maze. It was made go barbed wire with the intent of keeping the cattle from getting to the railroad tracks. For me it was a challenge to keep Aria on the path through the maze. But I did manage to get her to follow me instead of the direct path. 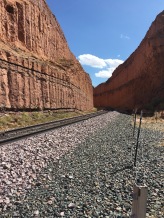 Initially the path we followed was the red/gold sand that I have grown accustomed to here in the Moab area. As we rose in elevation the sand gave way to the sandstone slickrock that also dominates this area. The terrain was dotted with bushes, some living some dead, a few cacti and lots of rocks. As with many of the trails there were cairns placed at spots to mark the trail. Aria seemed eager to lead the way. Inherently she knew where the trail was by the scents of people/dogs that had gone before us. Occasionally, she would stray from the trail to investigate some strong smell be a rock or bush. 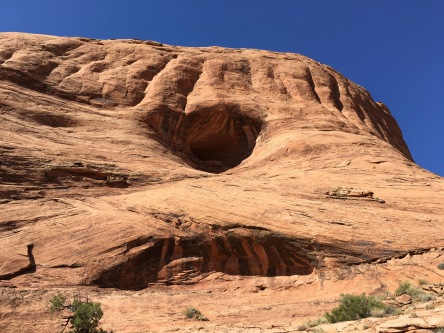 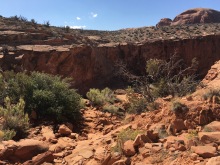 The temperature grew hotter and we took multiple breaks to rest when we found shade and have a drink of water. This trail doesn’t have much to provide shade during the midday hours. About 3/4 of the way to the end, we encountered the first of two challenges for us. The trail led up a steep rock.

Aria was like a mountain goat as she bounded up the rock from one foothold to the next. I had no time to think this out and followed. She was fine until the last few at which she halted, looked at me with a look that said “oops, I don’t know what to do now…”. I had one hand on the guide wire and the other bracing her butt. I was amazed at her faith in me as I directed her to a foothold and she leaped to it, followed by another and then another. We reached the top and within a dozen steps saw our second challenge.

Ahead of us was a six-foot ladder to climb

with a withered tree at the top. I carried Aria up the ladder, placed her on the ledge and scrambled onto the ledge, using the tree to steady myself.

We came upon Bow Tie Arch first. This looked more like a skylight to me than an arch. But it was picturesque with a small stream that formed at its base and one lone tree growing out of it. I tried to capture the view with a photo, but didn’t really capture it. Perhaps if I had a real camera and a ten foot ladder, it would have looked better. I guess you the reader will need to visit this on your own to see what my iPhone missed.

From a distance, with no people in the view, Corona Arch doesn’t look very tall. However, get closer to it and you will see how tall it is. I asked somebody to take a picture of Aria and me. In order to get the entire arch and us in the picture, the person only stood about 30 feet away. But we look tiny compared to the arch.

The arch provide shade which I took advantage of to share a snack with Aria and drink some more water. As there were no other hikers nearby, I felt no need to leave the area. We relaxed and soaked in the view of the valley and surrounding rocks. Eventually I heard voices of other hikers and decided it was time for us to head back the way we came.

Enjoying the shade of the arch 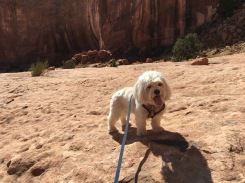 The trip back was just as enjoyable as it was heading to the arch. However, Aria was in no rush to return, which I notice happens on every hike so far. For the two challenges, I carried Aria down them. I would say that the hike in and out took a little over 2 hours and is about 3 miles, round trip. Other than the climb to get to the start of the trail, the gain in elevation is so gradual that you may not notice it.

I have found that I like the BLM trails for two reasons. First they allow pets and second there are generally few other hikers on them. Perhaps this is because most people are drawn to spending time at the two national parks or they just don’t know about the BLM trails.