About 65 miles southwest of my campground in Moab, is The Needles portion of Canyonlands National Park. A couple of weeks after our first visit to the Island in the Sky portion, I decided that I needed to take a day off. Technically I have two days off each week, but I get wrapped up in my routine and forget to take time off. It is easy for me to make my rounds in the morning and spend time talking with people only to find the morning has slipped away. Knowing this, I told myself and a couple of other campers that I was taking the rest of the day off.

The day wasn’t going to be hot, but I left a couple of fans running and the RV windows open for Aria. She had plenty of water, some food and had a nice long walk while we made the morning rounds.

The road was pleasant. I saw a spot named Needles Overlook, and took an hour detour to see it. Few cars on the road and it appeared I was driving to nowhere. Eventually, I arrived at the overlook. If you have a fear of heights, don’t get too near the edge. I wasn’t sure what to expect. I thought perhaps I would see The Needles for a high vantage point. It was a spectacular view. But I don’t think I saw the Needles. 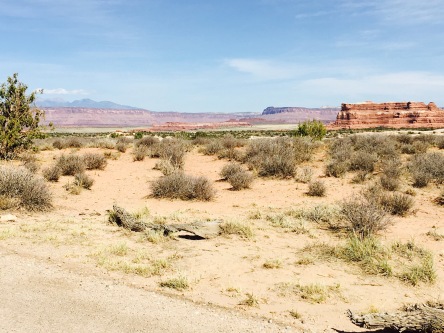 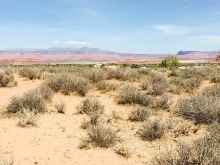 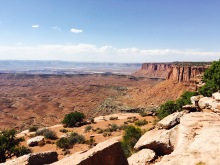 After a bit at the overlook, I decided to get back in the car and head to my intended destination. Just before the road that leads to the park, I ran into road construction. After a minor 20 minute delay I was travelling another smaller road that was dotted with skeletal remains of ghost ranches. I really wanted to pull into one and take pictures, but the Private Property and No Trespassing signs deterred me. I drove on among large cottonwood trees, past a prairie dog, a flock of wild turkey and the Utah state monument called Newspaper Rock. The the varied shades of gold, white, green and brown colors were so different from the rest of the Moab area that I wished I could take a picture. There was no place to pull over on the narrow road and the distracted driving course I took while at Abbott was still firmly engrained in my mind. You the reader will just need to use your imagination.

A quick stop at the visitor center to ask where the best place to view The Needles would be, resulted in two locations. Both provided wonderful camera opportunities. I consulted my map, and decided to drive to the furthest point and then work my way back to the entrance. This led me to Pothole Point. I was worried that it referred to the road, but it was actually the overlook of slickrock that was filled with potholes. Some were dry while others contained water for past rain. In the distance I could see the Needles. My second spot to stop was along a gravel one land road that led to Elephant Rock. There was one time I needed to pull over at a spot that would fit two vehicles, so an oncoming one could pass. It was a fun drive; albeit slow.

The Needles were closer here and I attempted to use my small tripod and bluetooth connection to take the pictures. More difficult to figure out if I am in the picture or not.

I passed some of the campgrounds in this section of Canyonlands National Park and they looked nice. They are primitive, so don’t go unprepared. I decided to take one hike in this area. It was named the Cave Spring trail. I will admit that it was a short trail, but I didn’t actually complete it. It is a loop trail with two ladders that you climb to reach the upper portions of the trail. The trail starts out a sand trail, leading through sage brush to a series of “caves”. One is set up to resemble how cowboys of the past used the caves as a home while tending the horse herds. Another cave contained the spring which is why the trail is named Cave Spring trail. Being basically in the desert, this spring would be a life saver to the thirsty cowboys. Up the two ladders brought me to a nice view of the surrounding area. However at this point I lost track of the trail markers. I attempted to find where the trail would lead and ended up at a couple of dead ends or cliffs. Since I was already 30 minutes past the time I planned to leave the park, I opted to return to the ladders and return the way I came. 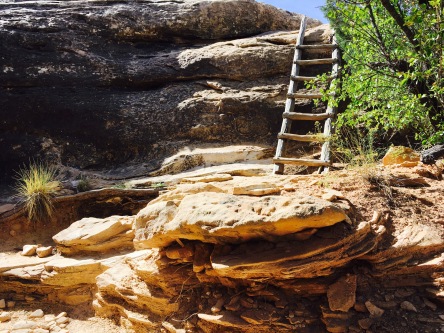 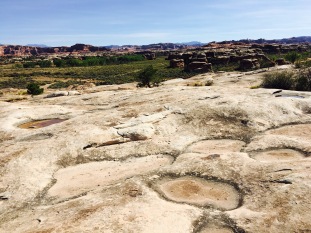 On the way back to the main highway, I decided to stop at Newspaper Rock to take a few pictures. It is too bad that in years past, people have added their own markings to the petroglyphs. But it was interesting to view. I wonder what the stories tell. A side note, there are many petroglyphs all around the Moab area, so if you enjoy this, Moab is the place to be.