After my week in Joshua Tree National Park, I decided that I would take a slow ride home. I really tried to stick to the 4-5 hour drive time. I headed over to Las Vegas to do chores (laundry, cleaning, chilling).  Okay, chilling wasn’t a chore.

I stayed at the Las Vegas Oasis RV Resort. This place was spectacular and huge. Nice laundry areas, pools, shop and a cafe that served breakfast & lunch. The pull through sites were level. My only gripe is that they only sell propane from 11-11:30 am. I could have had Tortoise washed as there seemed to be an on site service that specialized in this. They even had grass in some places, which Aria appreciated. I talked with one couple who had been there for seven months.

Before leaving Las Vegas I stopped by for a quick hike at Red Rock Canyon National Conservation Area. I would like to head back there for more hiking. I only took a trail next to the visitor center for maybe two miles; took a few pictures and headed back to the RV park. 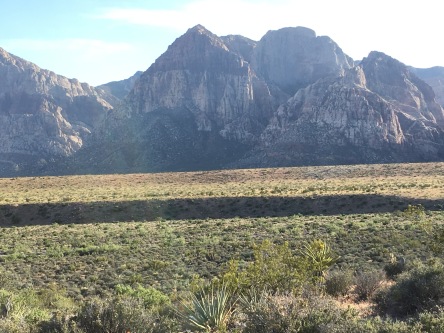 I next headed towards Flagstaff, AZ. I wanted to stop at Goosenecks State Park in

southeast Utah. I drove by the Hoover Dam, but didn’t actually see it. The road demanded my attention. I probably could have found someplace to stop and hike over to it, but decided to keep going. I stopped for the night at a KOA in Williams, AZ. It was a nice spot. My view out the front window was into the Kaibab National Forest.

I travelled onward the next day through Navajo lands to Goosenecks State Park. This was a pleasant drive along a two lane highway. It had plenty of spots for me to move over and let those behind me pass by. But most of the time, I was the only one on the road. On both sides of the road, I enjoyed views of plateaus off in the distance. As I got closer the road wound up and down through the red rocks. I found myself looking at a few of the monuments of Monument Valley. The rain was coming in, so I decided not to detour thinking I may stop on my journey homeward. But my route home did not go back that way. Looks like another trip for another day.

The roads became smaller as I turned towards Goosenecks State Park. I ran into a sign that said my RV would be to heavy further down the road. Lucky for me, the road leading to the park was just to my left and I wasn’t going any further on the road. About a 2 mile drive on a narrow road brought me to my destination. I was relieved to see that there were only a few RVs at the park. I was told that since I was self-contained, I could park anywhere along the rim. A bit nervous I drove on. This would be the first time I took Tortoise off a paved road for any distance. The road was well packed, but had large rocks in odd places. I crept along at about a mile and hour, making sure to go slow over the rocks. The further along the road I went the less the road resembled a road. I found a spot with a table that appeared to be a good site. It became my spot for the night. I was mildly surprised to find that the spot was fairly level. As I pulled in, the rain I had been avoiding caught up to me. But all was well since I didn’t need to leave my comfy RV to get set up. 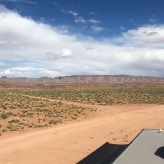 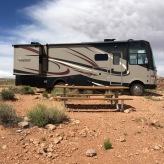 The rain moved on and Aria and I ventured outside to explore. Here is a brief video of one of our walks along the “road”.

After a few shots, I grabbed my camera lenses and tripod and headed up to the roof. I thought the height advantage would provide better shots. I was wrong. It was windy up there, so I took a few quick shots and climbed down. I was experimenting with the fish eye lens, but I don’t think it really helped much. The telephoto lens worked better at some of the far off shots. During the night it was windy. I kept wondering if an RV every got blown over the edge of the rim.

The wind, made me curious about the weather on my trip home. I found I was between two storms. One ahead of me, which I didn’t want to catch up with and one behind me that I wanted to keep in front of. I did manage to keep between the storms, but it meant long days of driving again. Cracker Barrel became the destination camps on my trip back home. Well, if nothing else I ate well.