When I learned the week my grandkids had their spring break and Adam could get time off, I started making plans to head west for a few days camping with them. Gayle would once again need to fly out and meet at the destination, since she can’t take 3 weeks off from work. Adam could pick her up and with the grandkids, drive out to wherever I would be.

I thought if I arrived mid-week, I would have a better shot at finding a site. This gave me a small window of time to prepare the RV and get it de-winterized. I was up for the challenge.

The route to take would be crucial if I wanted to make my mid-week target. Denver was still getting snow and Oklahoma had high winds predicted. I decided to take the winds over the snow, as I figured the winds in Oklahoma probably were blowing through Kansas too. The mountain areas of New Mexico and Arizona, were predicted to have nighttime highs in the low to mid 30’s, while the desert could be in the upper 80’s. I decided to pack clothes for all types of weather. Not the best decision since I packed too many shirts. One of these days I will get the mix of clothing types correct.

My streak of leaving later than planned remains unbroken. This resulted in getting to the campground in Missouri much later than planned. As in the past, I made a reservation for the first night’s camp, so I wouldn’t need to worry about finding a spot.  The first night I was able to rearrange some of the things I hastily shoved into any available cabinet to get myself started on the trip.  Note to self – when somebody offers to help get things loaded into the RV, don’t be stubborn. I probably would have been closer to my planned departure time if I had accepted Gayle’s help.

My drive time goal is to drive about 4 hours then stop for the night. In reality, I always extend the drive time when I need to arrive at a destination by a specific date/time. On my journey west, I extended my drive time to 6-8 hours. Eight hours of battling wind, is exhausting. The only day that came close was to my 4 hour plan was the day I arrived at Joshua Tree National Park. I would have made it about 45 minutes earlier, but the last 1.5 miles to the exit was backed up due to construction traffic.

Day two saw me staying overnight at a Cracker Barrel. They welcome RV’s to stay overnight in the parking lot. I took advantage of this and had a nice dinner. This was the last time Aria saw soft green grass. Day three found us in Edgewood, New Mexico at the Wild West Animal Reserve & Zoo. I found this gem via Harvest Hosts. Basically I had another free night of camping. Louis, in the office was very friendly and we chatted for a while. I arrived too late to tour the zoo. But did purchase a couple of animal finger puppets. They locked the gates at 6 pm and opened in the morning at 8.  Aria and I had the parking lot and what appeared to be a frisbee golf area all to ourselves. I set up the grill, threw on a steak and enjoyed a beer to start off a very peaceful night.

At this point I had another route decision to make. I could avoid most of the mountain driving by heading south on I-25 from Albuquerque and try to make it to Tucson or I could take the mountain route and try to make it to Phoenix. Tucson was the longer route and would take an hour longer to get to Joshua Tree National Park. I chose Phoenix. Knowing that I may be dry camping for the next week, I found an RV park to dump my tanks and enjoy electricity for a night. It was 55+ community RV park north of Phoenix. The park was nice but I had to switch down to the 30 amp service as the 50 amp on my power post kept shutting down my EMS (electric management system). Aria also searched for grass, found something similar and came back covered in burrs. I spent most of the night, pulling them from her fur.

When I finally got to the park, I saw plenty of spots to set up on the BLM (Bureau of Land Management) land outside the park. This would be my fallback for the next two days if I couldn’t find a spot in the park. About a half mile into the park I lost all cell signal. I found a spot, but not at my choice campgrounds of Belle or Jumbled Rocks. My 3rd choice was the Cottonwood campground where I snagged site 4B in Loop B. I was able to back Tortoise into it, so I paid my registration  fee, set out a couple of chairs and headed back towards the park entrance to find cell service.

I called Gayle to give her the news and sent both Gayle and Adam a text message of where to find me, Aria and Tortoise. I also modified my Lake Perris reservation. I left the last two days on the reservation, in case the family grew tired of Joshua Tree. My water and power conversation plans may impact their desire to camp with full hookups more than tiring of the park. I am sure that Aria would like to see green grass again.

Site 4B is not level however the view is grand. Most of the sites in the campground are not level. This is due to the campground being built on a hill. It is the oldest of the campgrounds in the park. The best I could do at leveling is to have a slight list towards the passenger side. Aria woke me each day about sunrise. Mornings are chilly and on Friday, after opening my door, it didn’t want to close. I pulled in the slides and retracted the levelers. The door still would not close. Since I couldn’t drive the RV with the door open I decided to wait for Adam to arrive. He could drive me to the park entrance where I could get to a cell signal and call for repair. I releveled Tortoise as best I could and found I was able to shut the door again. I am not sure if it was the cold, or the leveling, but was relieved that the door closed again. As the day warmed up, the door became much easier to close. If anybody has had this issue, please let me know.

Walks with Aria are fun. She is a trooper and appears to like to pose for pictures. However after every walk, I need to wash her paws as the road turns them black with dirt/grime. 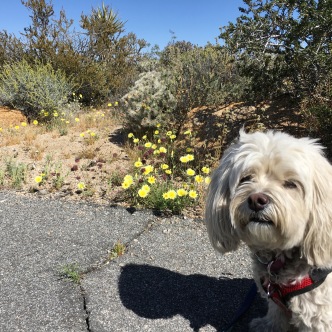 Adam, Gayle and the kids arrived later than I thought they would. However once there Adalie & Hayden took the time to give Adam the tour & rules of Tortoise. It was as if they had never been gone since their first journey a year ago.

The weather for this trip was very nice; cool nights and warm days. No extremes that kept us from hiking and enjoying every day. The hiking trails at Joshua Tree National Park are not difficult. Most are well-marked. Only one allows dogs, so Aria was confined to hiking around the

campground and on the roads. The kids seemed to enjoy each trail for about 1.5 – 2 miles before they were ready to head back to camp. If a trail rocks the kids could climb on, the longer we went on the trail. As we walked, I would hear about the rock formations and what the resembled. Many, I was told resembled butts. We did run into this one that I was told looked like a loaf of sliced bread.

Within the park there are a variety of landscapes. All desert in form, but the rock formations vary in different sections of the park. Some are rounded, like they were poured out and solidified. Others appear to have been picked up and placed one atop the other. Then you come across massive piles that look like some bulldozer just pushed all the rocks into a pile. The kids liked the rounded boulders to climb on. 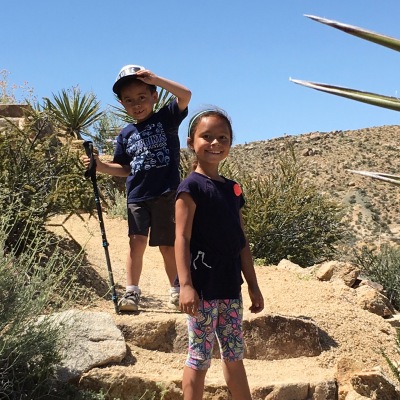 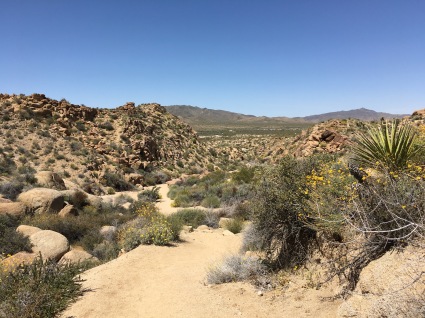 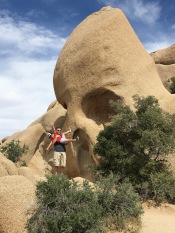 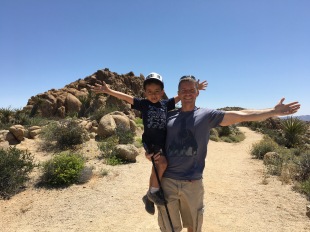 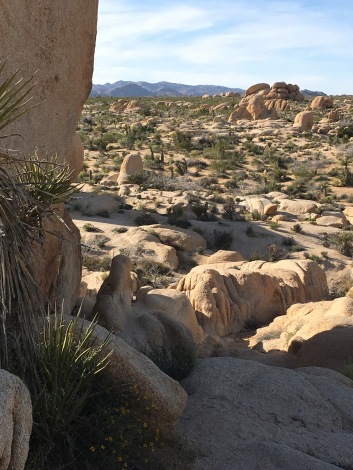 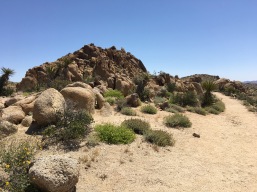 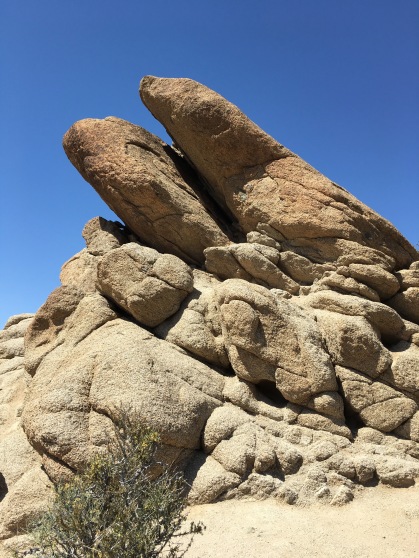 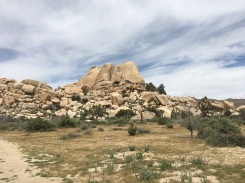 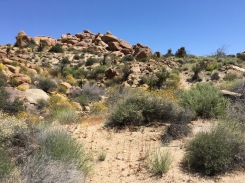 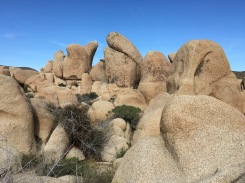 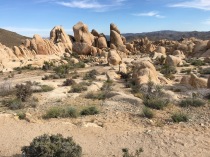 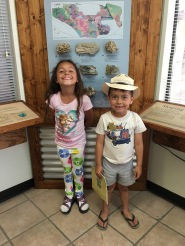 Besides rocks, there are plenty of plants and wildlife to see. Hayden seemed to always find some bush or cactus to run into. Adalie & Hayden found plenty of critters and plants to complete their Junior Ranger badge requirements.

The Oasis of Mara trail is behind the main visitor center. It is the only trail that allows dogs, but Aria stayed at the RV. The day we went turned out to be the hottest of all the days. This trail is paved which only reflected the heat back upwards. Although informative, this trail was the dullest one we walked. The first trail we partially did was the Mastodon Peak trail. We made it about a 3rd of the way before the kids wanted to turn back. The kids were troopers as this was the 2nd most difficult trail in the park. Had we only gone a bit further, we would have come across one of the many mines in the park. Adam, Hayden and I did walk up to the summit of the trail, where I could see all the way to the Salton Sea. It was also one of the rare times that I got a cell signal.  My phone went crazy dinging as many text messages were received. The Lost Palms Oasis trail was rated as the toughest in the park. We again hiked the trail for about 1.5 miles before the kids were tired. I went on a bit further thinking that I would stop at the next rise. But when I got there, another rise was on the horizon. I turned back to join my family after reaching the point where the Mastodon Peak trail met up with the Lost Palms Oasis trail. The Baker Dam trail was a loop about 1.5 miles long. Of the trails we took, this was the prettiest.

Near the end, you can view petroglyphs from ages long gone. I wonder what they people thought as they carved the images into stone. Did they tell a story like I am here? I’m guessing that my story wont be around as long as theirs.

The family liked the park so I cancelled the reservation at Lake Perris Recreation Area and we stayed the entire time. We did change to the site (2B) next to ours when it became available. It was a bit more level. 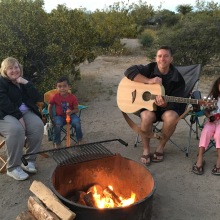 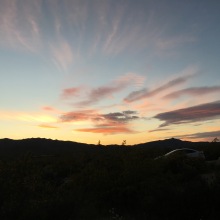 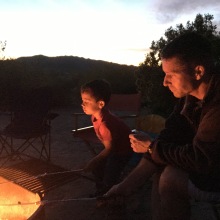 I enjoyed the park. I could spend much more time exploring this national park than the week I was there. I think the campground hosts thought of me as a long-term resident.  Most people only stayed a night or two. For those looking for an available site, I would suggest getting to the campground by 10 AM. That seemed to be the best time to find the perfect campsite. By noon the choices become limited. April was the perfect time to visit the park. It was neither too cold nor hot. Also, it is probably the best time to view the various blooms of the park. See Full Bloom – Joshua Tree National Park for various pictures. I am sure I will return for another visit.