I had the urge to head out to another state park.  I made a reservation at Mississippi Palisades State Park in Savanna, Illinois.  The park looked nice on the web.  Friends who have been there said it was nice.  In my mind, this would make a good weekend destination.   Friday morning, I would drive the RV to the park and return Sunday evening.

I would arrive in the early afternoon and get camp set up.  Gayle would join me later Friday evening after she got done with work.  Saturday would be spent hiking the trails along the mighty Mississippi, taking in views of the river and Iowa.  The plans were good.  I started to get the RV ready.

Thursday after dinner, I checked the weather forecast one last time.  The partly cloudy weekend turned into thunderstorms.  Gayle and I debated about going.  I kept looking at the positive side that there was a 30-40% chance it would not rain…  I lost the debate.  With disappointment, I cancelled the reservation.

Gayle suggested that we try the following weekend – Labor Day.  It did have the benefit that Gayle would be able to enjoy an extra day.  But, I kept remembering all the articles and blogs I read telling me to avoid travelling/camping on a holiday weekend.  But the urge to explore was stronger than all the advice I read.

I started my search with Mississippi Palisades State Park.  No luck, it was all filled.  Gayle suggested an old favorite; Door County.  The entire state of Wisconsin appeared to be filled except for walk-in spots.   Private and public campgrounds were full.  Okay, this is a bit exaggerated.  I could find some spots near the northern part of the state, but Gayle wasn’t to keen on the idea of driving 5 or more hours by herself on Friday night.

I made calls and searched the web constantly.  I could get into Peninsula State Park in Door County as a walk-in.  However, all the sites were non-electric and the Wisconsin State Parks do not allow generator usage if the camp provides electic sites.  My batteries would not last 4 days cooling the food.  Actually, I don’t know this, but not sure I am willing to experiment yet on how long I can go before needing to recharge batteries.   Perhaps I will try this on a future trip, but it will need to be at a location where I can run my generator.  I sent out a few emails to campgrounds that had no online reservation system.   I was casting a net, expecting nothing in return.

I settled on two options, that I wanted to run by Gayle.  Option one was to head up to the Chequamegon National Forest and find a free spot to camp.   Not really sure what I would do if I got there and couldn’t find a spot to camp.   I guess I could find one of the casinos in the area to spend the night.  The problem besides finding a spot would be communicating to Gayle the directions to find me.  I am sure that after dark, the forest roads don’t have a lot of light to help with the drive.  This idea as an option was rapidly moving to the Not This Time list.

Option two was much more reasonable, it was just a few miles away from where the RV is stored.  I could venture over to Illinois State Beach Park (now known as Adeline Hay Geo-Karis Illinois Beach State Park).  Not much to explore, but we could still spend the weekend in the RV.  Thinking this would be the option, Aria and I hopped into the car for a ride out to the park.  I decided that I wanted to scope out some of the walk-in sites, as the park was also booked full.   We got to the park, and the man at the gate was very helpful.  He provided a map and highlighted which sites were the walk-in ones.  I drove around the campground, taking pictures of the sites that I thought would be good for the RV.   unfortunately, the park doesn’t allow pets on the beach nor on the trails.  This would limit our walks for the most part to the campground and along the park roads.   However, Aria did not seem to mind that she was restricted to those areas as we walked around and enjoyed the fresh air.   Here are some of the sites I thought looked good. 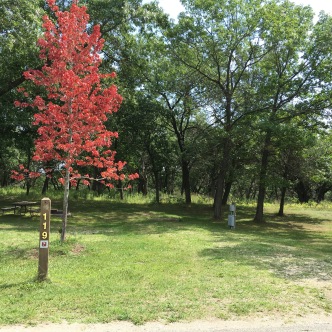 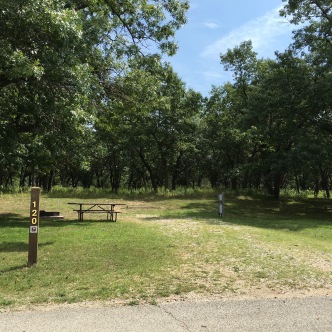 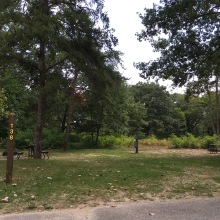 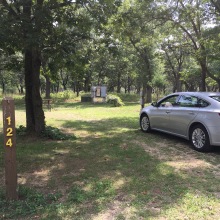 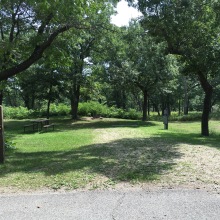 Upon my return home, I checked my email and actually had a response.  One campground had a last-minute cancellation.   What luck a campground in Door County!  I quickly sent back an email indicating that yes I was interested.

An opportunity to explore.